Lucy - where has my baby gone?

Lately, I haven't done as much stitching as I did during the kitchen renovations. One of the main reasons is my new wee love, Lucy. Hasn't she grown? Lucy & I graduated from puppy pre-school on Thursday. Hence, Luce has her first certificate for her folder in the filing cabinet - you know those files of our lives that all the kids have? LOL - my puppy can sit, stay, drop, walk on a lead & pee on command (fabulous guide dog stuff).

Stitching-wise, I'm waiting for my Celtic Autumn chart to arrive from an EBAY purchase. While waiting, I haven't been totally idle. Fred has had a few extra stitches, but nothing that is obvious between photos. He's probably 80% done and well on target finish of end of 2007. I've also started a new project - a Joan Elliott 'Renaissance Lady' that I found in The Cross Stitch Collection magazine. As there's no significant change showing on Fred, so I will leave you a pictorial progress of Lucy. 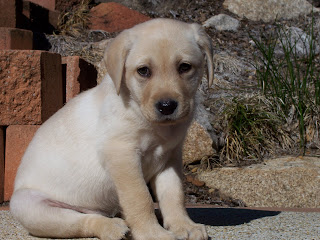 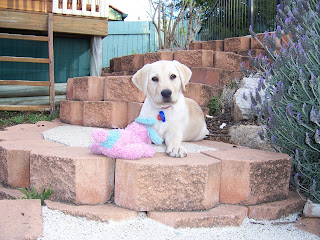 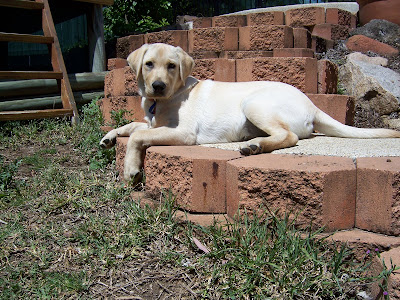 Lucy - where has the baby gone?

Lucy is nearly 19 weeks old & now weighs 16Kg.
On Thursday, she graduated from puppy pre-school. She can sit, stay, walk on a lead and (believe it or not) pee on command. 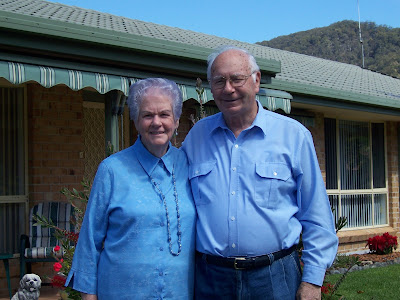 Exams are over, school holidays are here! Woo hoo!

Paul & I spent the weekend travelling. We took a visit to Gosford & Laurieton in NSW to catch up with relatives. We flew to Newcastle, hired a car, headed south then north again. I got to take this awsome pic of Paul's parents just before we jumped in the car to come home.
Friday update: Sadly, my cousin, Ray (pictured here with his lovely wife, Irene) died this morning. He was an important part of my childhood & I have lots of lovely memories of him & his mother, Clare. He'll be missed greatly. He was only 61 years old. 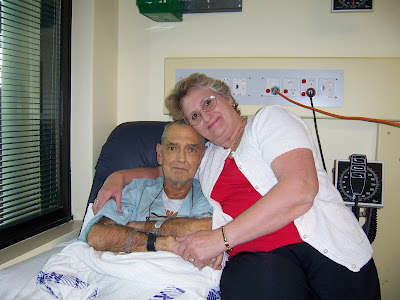 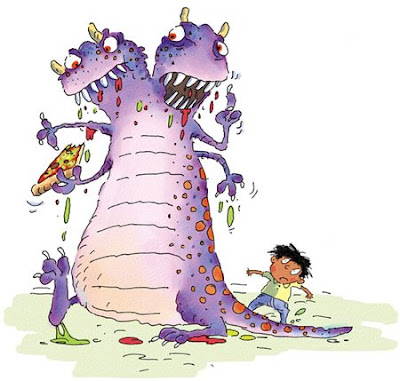 It's marking & report writing season at school - the two headed monster of school teachers' lives. There's not much else happening at the moment - no sleep, no cross stitching, no blogging.

I have, however, received mail! 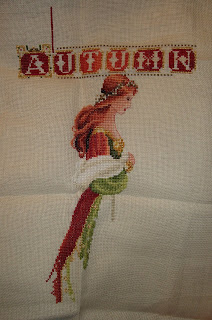 Karen, decided that she wanted to stitch Celtic Autumn on a different piece of fabric, so she offered this started project to someone to finish off. I'm the lucky recipient.

Thank you very much, Karen. It's absolutely gorgeous! I'm thrilled with her! I will finish Fred and then finish this beautiful piece. Stay posted for updates on this beautiful, beautiful hand-me-down.

Hugs of delight all the way from Australia, Karen.

To all of you who read my blog, I wish you loads of happiness & laughter,

How's everyone else managing? I've not been around much because it's end of term & I'm flat out marking & writing school reports. I hope all's well.

This blog entry is to show you what I received in the mail today! Karen, decided that she wanted to stitch Celtic Autumn on a different piece of fabric, so she offered this started project to someone to finish off. I'm the lucky recipient.

Thank you very much, Karen. It's absolutely gorgeous! I'm thrilled with her! I will finish Fred and then finish this beautiful piece. Stay posted for updates on this beautiful, beautiful hand-me-down.

Hugs of delight all the way from Australia, Karen.

Wishing you all loads of happiness & laughter, 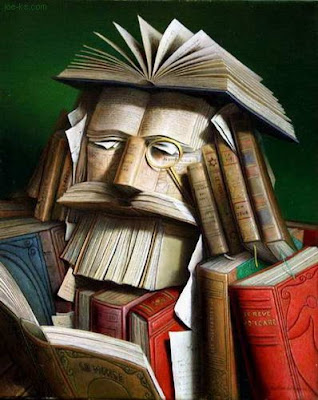 Friday's as good a day as any to update the blog. It's also as imaginative as I can be for a name for this week's entry. It has been a busy week.

Cadet Princess & Prince both did the QCS this week - along with what seems like half our neighbour's kids. The two days of testing was stressful, to say the least, & our two candidates handled it all quite differently. Miss, who is an enthusiastic student, tried her hardest & will have done well - she'd like to do medicine one day & the higher her overall position score (OP) the more likely she will succeed in gaining entrance. Mister (who is 2 years younger) was considering he would wag the exam because he's totally OVER school, as kids get, until Dad threatened him with a fate worse than death if he didn't go.

The reason for such a reaction from dear old dad? The QCS is tied in with school ratings. If Mister hadn't sat the exam, he would have automatically got an E- grade which would have influenced not only his marks but also the school's standing against the State average score. His mates would not have been pleased as their OP would have dropped!

Don't get me wrong. The cadet prince has school attendence issues, but overall he's a nice kid. From now on in, though, if the he wants to wag school (he's missed about 30+ days this year), we're not going to argue with him that he does. The experience of having 6 other kids who have done year 12 before/at the same time as him, tells us that if he's not going willingly at this stage, he's a lost cause. He knows he's damaging his post-school options, particularly if he wants to go to university or get an apprenticeship.

Experience also tells us that our cadet prince will come good and make his way in the world quite nicely. What he did or didn't do in school won't really matter in 5 years time. Many others before him in the family have had their fair share of rocking the boat some time in the past (me particularly) & they are doing just fine now. He will be OK too.

Meanwhile, youngest princess is head-in-books working towards all important half-semester exams, I'm back teaching full-time & loving it, Paul's caught in Darwin at the mercy of Qantas, & Lucy's toilet training is progressing nicely. We've even had follow-up rain to last week's soaking efforts.

Bliss
Posted by Felicity at 18:47 0 comments

to day pavarotti died. what a loss to the operatic community!
Posted by Felicity at 14:36 0 comments