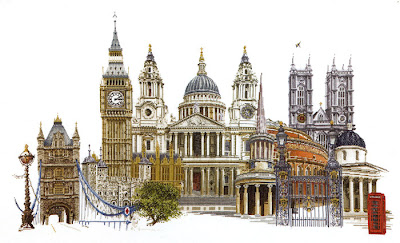 For the tourists flocking to London there's no shortage of famous sights at which to aim their cameras. The been-there, done-that, got-the T-shirt shot every visitor to London wants is a picture of the most famous clock in the world - the Palace of Westminster Clock Tower - aka Big Ben. I'm no exception. During our trip to London in 2006, I must have snapped off at least 200 frames of the tower.

The name Big Ben is often used to describe the tower, the clock and the bell but the name was first given to the Great Bell. 1859 was the beginning for all three elements when the Clock Tower was completed, the Great Clock started on 31 May and the Great Bell’s chimes were heard for the first time on 11 July.

So, of course, one day I would like to stitch the attractive collage of London landmarks created by Thea Gouverneur (pictured above). I've just got to rob a bank first ... (which will make entry into the UK impossible, but that's another story).

and happiness & laughter to one and all,