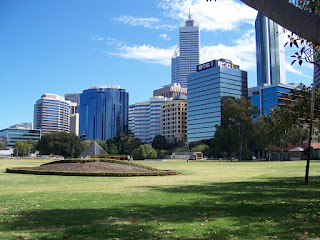 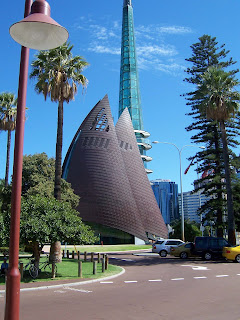 Hello from Perth in Western Australia. Paul's here for work, so I've brought over my study stuff & am spending 5 days with him before we head off for a 5 day break to the Margaret River Vineyards. It's such a hard life!

Perth's great but super expensive. The locals are flush with funds (it's definitely not a place to be a lowly paid teacher). Consequently, the shopping is good. I think the design of the city centre and its malls has something to do with good shopping too. I can also recommend lots of eating places but the best so far would have to be King Street No. 44 - purveyors of fine food, coffee & wine. We've had two good meals there this week.

Happiness & laughter to one and all ...

Bliss
Posted by Felicity at 13:21 0 comments

Getting tradespeople, other than plumbers, to do quotes or turn up for work here in Brisbane, is like trying to organise the mating of two pandas held in captivity on opposite sides of the world. I've renovated / built at least 5 houses in the last 25 years, and nothing prepared me for the slackness of this lot!

However, we've finally signed papers for the construction of a new kitchen! It's all about a new stove, really. We often cook for large crowds but only have a ¾ size oven. Hence, last September, we bought a new gas-electric upright stove thinking (naively) that we could get a carpenter to come and revamp a small portion of the kitchen to fit it in. Noooooo! Too simple! For starters, the laminex is out of date. Secondly, once we started getting quotes, we found that new kitchen quotes were only 1,000AUD more than our small renovation.

It then got somewhat more complicated (as these projects often do). If we are revamping, it seems useless not having everything in the kitchen where you want it. Consequently, the sink is going under the window instead of sitting smack bang in the middle of the best bit of bench space in the kitchen. I'll post a plan soon.

Watch this space for updates from about 16th April...

Bliss
Posted by Felicity at 04:52 0 comments 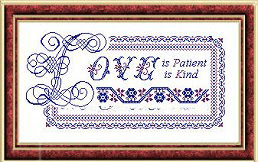 I'm thinking of reducing the size of my project. On 25 count fabric & including 2" borders all round, just this much is 13 x 33 inches. Sadly, any bigger and it's far too large to be practical to hang on any wall in Castle Bliss &, to be frank, I value my eyesight far too much to stitch it over one stitch.

Ignoring the little bits I couldn't photoshop out just under the L & flower border, if I cut it down to just this much, do you think it's too tizzy with the border of curly bits?

Don't be fooled by the little graphic above! Today was one of those days you could live over and again if it wasn't for the sunburn! There was nothing really particular about it, considering that it was 38C, but what did that matter? After an enthusiastic burst of housework, it was a lazy, hazy day from paradise.

Gubbles and I got in & did the washing & a wicked house clean. Being all hot & sweaty afterwards, we wallowed with our garden hippo in the pool. We'd hardly got out again & hung a load of washing when Paul arrived home from an overnight trip to Mackay to see his boys so we got back in for another dip.

The day got lazier & lazier. Paul & I went to the RNA showgrounds to visit the homeshow (a fizzer), came back & climbed back into the pool both nursing a glass of Margaret River Rosé.

I hope you get a chance of one soon. Happiness & laughter always, 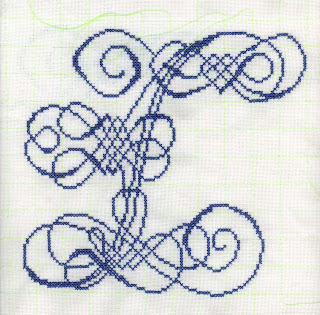 Toxic culture not empowering our girls

The advances made to improve women’s status are indeed worthy of recognition.
But we also have to acknowledge the tragic truth that the movement for the women’s equity, in many ways, appears to have failed.

We have allowed the development of a culture that is toxic to young women especially.
Rather than being seen as full human beings, equal and deserving of respect, young women are being barraged with hyper-sexualised messages that turn them into sex objects.

Liberation has come to mean a girl’s ability to get her legs around a pole, flash her breasts girls-gone-wild style, perform oral sex for schoolboys at weekend parties (daisychaining) or strut around à la Paris Hilton.

Women have been sold a false empowerment which is destructive of their real selves.
Sexual liberalism has not advanced women’s freedom – but eroded and undermined it.
Girls are living in a sexually brutalized culture.

Diane Brimble lies naked and dying on a cruise ship after being given the date-rape drug fantasy. One of the men named as a person of interest by the coroner investigating her death said: She smelt ugly. She was black and a “dog” who had ruined his holiday.

A gang of 12 in Melbourne sexually humiliate an intellectually disabled girl and sell the DVD to their friends for five bucks a pop. They urinated on her, threw her clothes in the river and forced her to give them oral sex but were just having a bit of fun.

Little girls are encouraged to develop sexy personas. Bras for eight-year-olds, braletes for three-year-olds, G-strings for 10-year-olds with slogans like Wink Wink and Eye Candy, T-shirts that read “You’re at the top of my to-do list” and “hotter Down Under”.

Then there’s the Peekaboo pole-dancing kit for six-year-olds. It comes with sexy garter and DVD demonstrating suggestive dance moves. The kit promises to unleash the sex kitten inside. Soon you’ll be flaunting it to the world and earning a fortune in Peekaboo dance dollars”.

The American Psychological Association just published “The Sexualisation of Girls” which concluded that an entire generation of young women was being psychologically damaged by a culture which prematurely sexualizes them.

Initial research by Womens Forum Australia backs these findings.
The report “Faking It: The Female Image in Young Women’s Magazines”, will be released in July.

Why aren’t we as worried about creating an environment destructive of the physical and mental health of girls as we are about greenhouse gases?

On International Women’s Day, it’s time to empower girls and equip them to resist – and fight back against – a culture that tells them they’re no more than the sum of their sexual parts.

Melissa Tankard Reist is an author and founding director of Womens Forum Australia, an independent women's think tank.
Posted by Felicity at 08:16 0 comments

Once upon a time but not long ago, one of my daughters stopped talking to me for three months - and gosh what a trauma that was! Let me tell you, to relieve your worry, that we are again the best of friends, so while my heart felt like breaking for a few months, all's well.

Today it got me thinking. I've just looked it up and it's 13 year, 9 months & 3 days since my own mother died. I've missed her every single day since.

The really weird part about missing her so much now, is that my mother & I were never close when she was alive. In fact, for my own sanity, the best thing that ever happened to me was that my mother died & all the things that I couldn't do anything about disappeared with her death.

My mother was a cold, abusive woman who cared about no one but herself.
Posted by Felicity at 23:17 0 comments

To all the wonderful women out there, no matter what age or stage you are in life, I hope that you know just how marvelous you are!

I wish you happiness & laughter always,

Bliss
Posted by Felicity at 15:24 0 comments

The seasons change on the first of the month here in Australia. It's Autumn! As Summers go, 2006/7 was pretty mild - no super temperatures, humidity or precipitation. We didn't even get to the beach (that could be because you are not a beach person, Bliss).
For some people March marks more than a season change. It signifies another birthday! One of my new year's resolutions was to keep up with family & friends' birthdays
Posted by Felicity at 04:30 0 comments