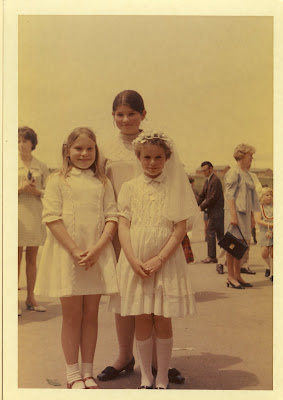 A friend from my teens said to me this morning that he had no pics of me when we were 18 that he could share - but that it wouldn't have made any difference because even if he did have a pic it would have been a photograph of a hand up to the lens, not a picture of my face. It seems that my aversion to having my photograph taken is nothing new. So, rather than spend quality time reviewing my psychology and statistics notes for the December exams, I spent today stuffing around working out why I don't like having my photo taken. The above picture is the reason!

This is a photo of me (on the left) at taken in 1969 with my older sister, AM, and my mischievious side-kick of a little sister, Lisa (mentioned in a blog about memories not so long ago). I look enormously fat - and I've been embarrassed about my round face ever since.

I remember well the day that this picture was taken. I was just over 9, Lisa was 16 months younger (so had probably just celebrated her 8th birthday) and AM was about 13. It was Lisa's first communion day. On that day, I also wore my first communion dress from October 1967. Our mother (who was obsessed with not getting fat) had told one of my sisters that if she got any bigger that she would have to wear maternity clothes! I saw this photo after it was taken and blind panic set in. I, too, was going to be wearing maternity clothes really soon. I don't think that I ever got over it.

The thing is, my mother was bird-like tiny in bone structure and ate nothing but chocolate and bananas! Everyone on planet Earth was going to be bigger than she was. Many of her offspring are taller than she was (I wasn't but I had a broader bone structure) smply because my father came from very tall Yorkshire English stock. On the day in question, I was wearing a dress that was 2 years old, so it's not surprising that it looked tight. I was also standing with Lisa who was long and skinny, kinda like Harry (and is, to this, day 4 inches taller and 2 stone at least lighter than me), and beside someone who was just about to have a growth spurt. I was always going to look chubbier than Moo and AM, even if I had no body fat because of broader shoulders and thicker bones.

I can almost tell you about every photograph I've had taken of me since. It's rare. In retrospect, it's a shame. The MOTH makes me have my photo taken nowadays because in years to come and when I am dead, my children won't have anything to remember me by because I was the one at every party holding the camera.

So, I leave you to enjoy a selection of warts and all pics of me taken over the years. 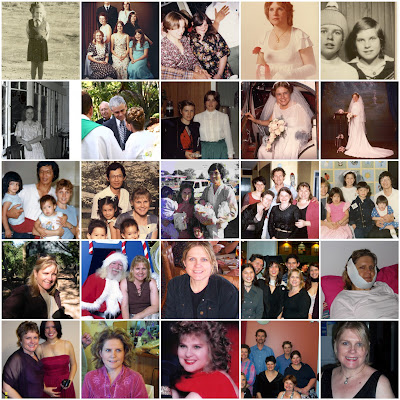