Both very beautiful and both wonderful to stitch!
My fave, though, is Vautier's beautiful Sampler done in DMC 839 & Kreinik Gold. 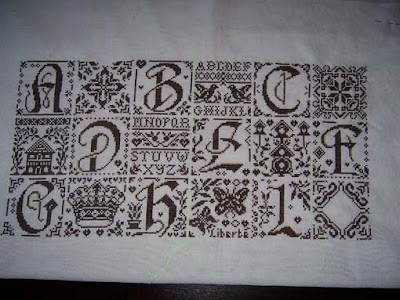 Isabelle Vautier's 'Grand Marquoir' Partie 2 is now finished except for an opening for a signature to be done later on), so this is a mini happy dance. 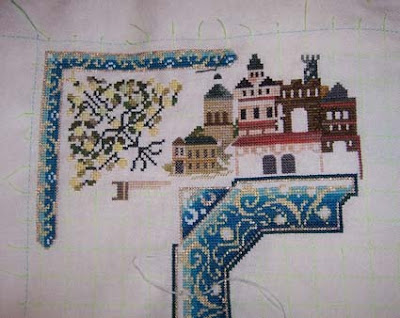 A week's worth of stitching on MTM.

I'm really missing The MOTH, who is away for work for the duration of the Spring break, but time alone at home gives me some worthwhile stitching time between walks in the park with Lucy & Harry and visits to the gym, both of which my hips need before the next round of family birthday dinners in October. The Cadet Princess (or is that La Princesse cadette?) turns 21 on the 19th, so the weekend before, she will be home from university in the north for a party with family and friends. The MOTH's benjamin son also has a birthday at the end of the month.

Felicity,
These are both gorgeous! Wonderful stitching. :)

wow, the Isabelle Vautier piece requires plenty of concentration, congrats on the finish. And what a good progress, I hardly had a needle in my hands last week.

wauw, those both look wonderfull !

They both look lovely. Congratulations on the almost finish. :)

Congrats on the very close to a finish!! And the progress is beautiful!!

Your wips are looking great. MTM is gorgeous.

Wonderful stitching Bliss. You do scare me a little though by not starting your Mandala in the centre. I would be sooooo afraid I made a mistake along the way. I must admit I also find the feeling of completing each round very addictive. However - that's just me and I love, love, love what you have stitched on your garden.

both you Grand Marquoir and Mandala are coming along beautifully !!! I've almost finished part 4 o the GM (but then I started months before you did).

Beautiful WIP. MTM is most lovely.
Have a happy weekend.

Your WIP's are beautiful. Thanks for sharing

Wow, they are both looking so pretty. Fun combination too, with them both being so different.
Sue

Really nice Flicity both are going to be beautiful